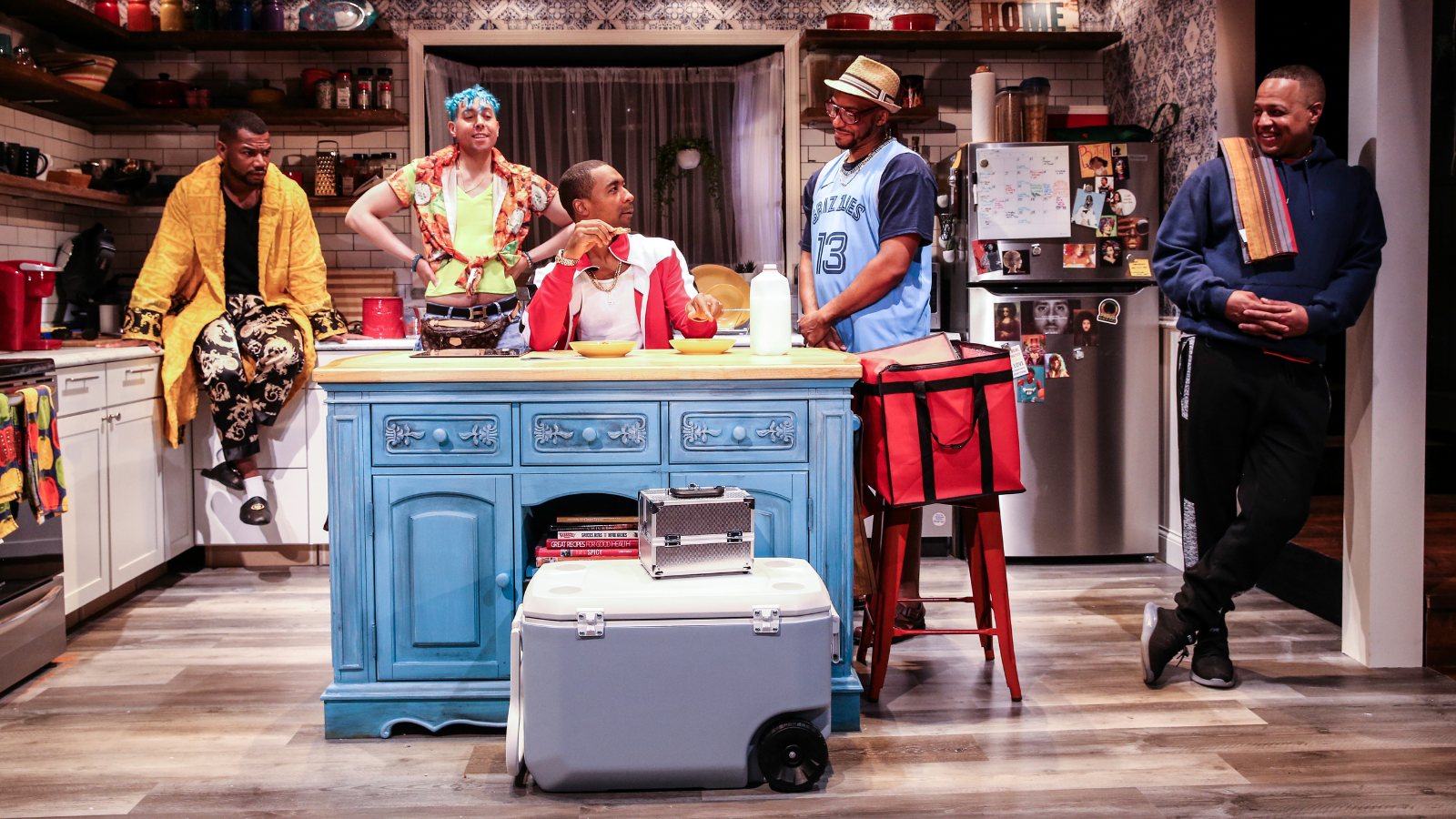 Ever since watching Moonlight in 2016, I’ve wondered where the film’s two protagonists ended up after the credits rolled. At the end of Barry Jenkins’s drama, two queer Black men (Chiron and Kevin) have reunited after years of separation, brought back together by a physical and emotional attraction that cannot denied. When we last see the couple, Kevin is caressing Chiron. However, given all the duo has faced under multiple systems of oppression, these two Black men are left with an uncertain future. I always secretly hoped that Kevin and Chiron ended up together. Maybe, despite their fractured history, they were able to live together and love each other as partners.

So, it’s a unique pleasure to see two Black queer men doing exactly that in The Hot Wing King, now playing at Washington, D.C.’s Studio Theatre. Katori Hall’s play, winner of 2021’s Pulitzer Prize for Drama, is based on a real-life Kevin and Chiron: Hall’s brother and his partner, who according to the play’s program, “were starting a life together in midlife after one had left a marriage to a woman.” Don’t mistake Hall’s staging of this story for fantastical queer wish-fulfillment though. Following in Moonlight’s footsteps, The Hot Wing King is an incisive, hilarious, and heartfelt story about found family that’s deeply honest about the struggles queer Black men must face in the American South.

The show opens in Memphis, Tennessee, the night before the city’s Hot Wing Festival. We’re in the home of Dwayne (Blake Morris) and Cordell (Brian Marable), our central couple. Dwayne is a hotel manager whose love of hospitality extends throughout his home, and set designer Michael Carnahan has created a spacious, modern suburban home that feels very welcoming. At the time of the play, Cordell is only two months into living with Dwayne, so he’s acclimating to life with his partner. Still, Cordell’s spirits are lifted by the New Wing Order, his cooking team aiming to win big at the festival. His other queer friends are a part of this team, including the vivacious Isom (Michael Kevin Darnall) and the dry Big Charles (Bjorn DuPaty).

This queer space faces a challenge when two straight characters enter the home. Dwayne’s nephew EJ (Derrick Sanders III) is a sixteen-year old who’s been couch-surfing ever since the death of his mother. EJ’s father TJ (JaBen Early), also pops by, but is hesitant to stay too long due to his homophobia. While Dwayne is quick to invite EJ into the fold of the New Wing Order, his mere presence sparks discomfort with Cordell, and the couple’s relationship—along with the entire New Wing Order—is put to the test.

Watching the show, it’s clear why Hall won her Pulitzer Prize. She has a remarkable talent for dialogue that blends the poetic with the mundane, as well as the dramatic and the comedic. For instance, when Cordell brags about how good his blueberry and blue cheese chicken wings are, it takes on an almost gospel fervor, with Cordell stating, “...when the Kansas City Barbecue Society judges received that into they mooooouth. The chicken just melted like a wafer of Christ’s body and all them bitches just about fell OUTTTTTTT.”

Throughout her playwriting, Hall is doing for Memphis what August Wilson did for Pittsburgh, or what Hall’s contemporary Dominique Morrisseau does for Detroit: bringing the Black language of a particular city into a national stage. In The Hot Wing King, there’s an added delight in seeing her mine the specifics of Black queer language. This includes everything from her characters’ song choices (Luther Vandross and Saweetie), to their referencing of iconic Real Housewives of Atlanta quotes (especially from Nene Leakes and Kenya Moore), to their fluid use of AAVE (“guap” for money, “kinfolk” for family, etc. ).

Director Steve H. Broadnax III, who directed the play’s premiere at New York’s Signature Theatre as well as Broadway’s Thoughts of a Colored Man, feasts on the full meal Hall has cooked up for him. The direction rivals Ratatouille in its reverence for the culinary arts. Even though Studio Theatre audiences don’t get to eat the food prepared onstage, getting to watch the alchemy behind making the perfect chicken wing is a treat.

Ensemble scenes shine, in particular, with each performer showing off their charisma and singularly-drawn personalities. Especially strong is Brian Marable, who imbues Cordell with a stubborn sweetness; just like his sweet-spicy wings, the character is a surprising mixture that proves irresistible.

The relationship between Cordell and Dwayne is the heart of the show, but Hall is also adept at dramatizing conversations between Black men that address the larger systemic issues (police brutality, toxic masculinity, etc.) facing them. Hall tackles these issues with sensitivity and restraint, never showing us unnecessary violence and always prioritizing the care Black men feel for each other. Each character is thoughtfully realized, though I wish I could’ve seen larger journeys for the characters of Isom and Big Charles. Their fraught-but-loving relationship feels complicated enough to be the subject of its own play.

‍The Hot Wing King arrives in D.C. at a critical moment in Black theatre, as playwrights expand which Black bodies and sexualities get the chance to be in the spotlight. Michael R. Jackson’s A Strange Loop just won the Tony Award for Best Musical, and has been wowing Broadway audiences with its multilayered depiction of a fat Black queer man. James Ijames’ Fat Ham, which won the 2022 Pulitzer for Drama and is running at the Public Theatre, offers a Black queer (and Southern) riff on Shakespeare’s Hamlet. Other off-Broadway shows, like Donja R. Love’s soft and Mansa Ra’s …what the end will be have formed a wave of queer Black playwrights finally getting the opportunity to write about their own experiences on New York stages.

Many cultural writers have grouped these Black queer playwrights together, but have unfortunately left out Hall from this line-up. Maybe that’s because The Hot Wing King premiered before the COVID-19 pandemic. Or maybe it’s because Hall is not a Black queer man herself. In any case, I’d argue that it’s pivotal that we not exclude Hall from this conversation. Just as Barry Jenkins used his experiences as a straight Black man to create the masterpiece that is Moonlight, Hall has used her extraordinary love for men like her brother to create a magnum opus on a communal queer Black experience.

What Moonlight and The Hot Wing King are doing goes beyond the level of allyship we typically see when writers try to write outside of their own experience; these works are profound acts of radical empathy. Jenkins and Hall open up their eyes to the messy, beautiful experiences of the “kinfolk” living next to them, and share these experiences with the world. We would all be so lucky if we could do the same.