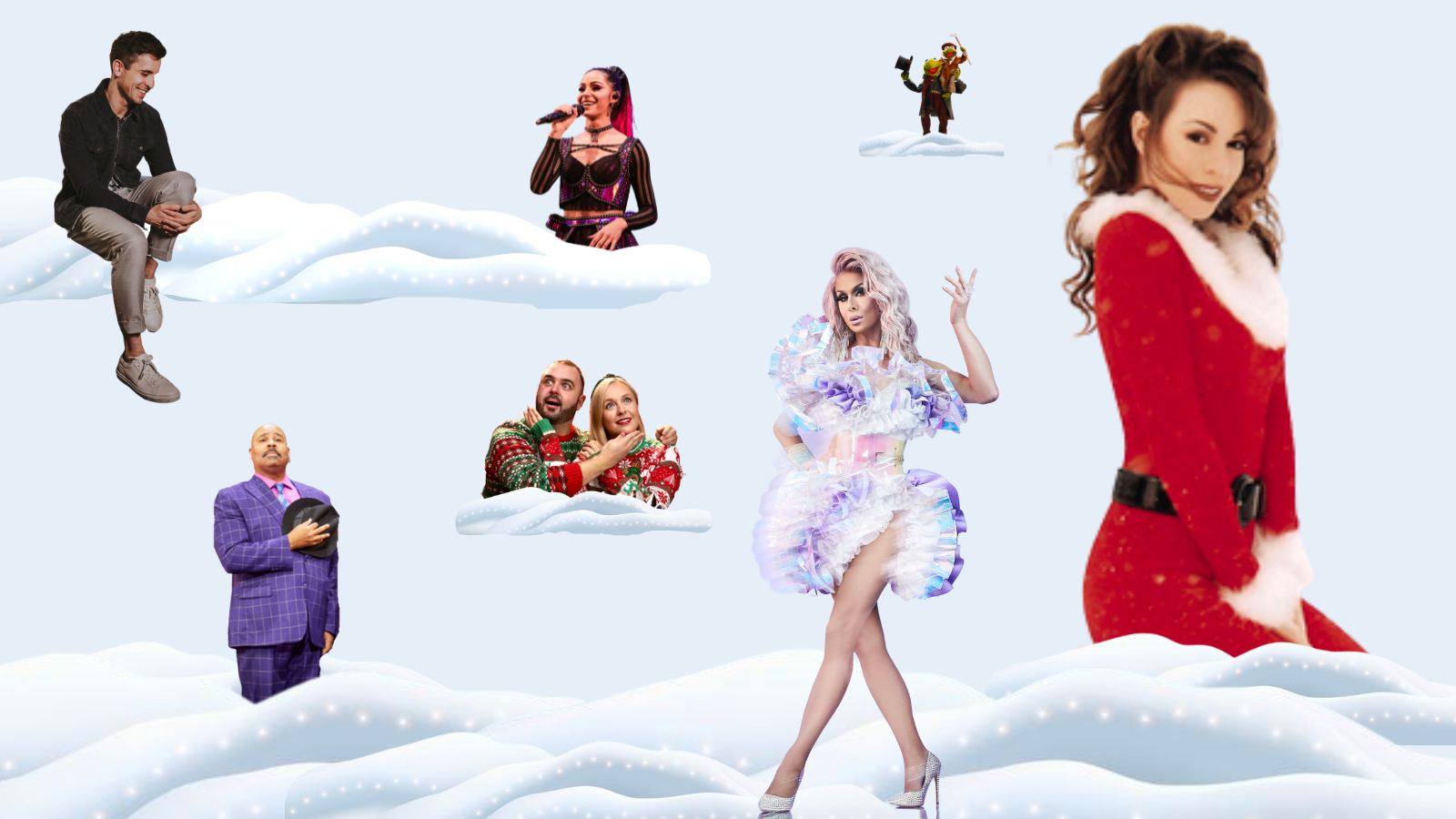 This time of year is filled to the brim with musical gifts for theatre fans coming to visit or already living in New York City. As December rolls around, the stars gather to perform holiday concerts of all kinds, ranging from solo shows to Mariah Carey tribute concerts to spectaculars with the Rockettes.

Check out our list, with show dates and descriptions and ticket links, below.

‍The 1953 Thanksgiving Special (November 21, Joe’s Pub)
‍Sam Reece & Becky Chicoine step into their alter egos as Broadway legends Betty Blanche & Crystal Rogers Senior for this Thanksgiving special. The duo will perform songs like “Thanksgiving is a Girl’s Night,” “Uncle Gary’s Somehow in Town?”, and “Have Yourself a Juicy Little Turkey.”

‍A Drag Queen Christmas (November 23, Town Hall)
‍RuPaul’s Drag Race All-Stars co-winner Trinity the Tuck hosts this extravaganza filled with some of the show’s fan favorites as they celebrate the holidays, including Silky Ganache and Aja. Plus, there’s a special performance by Todrick Hall! The concert is part of a 36-city national tour, co-hosted by Nina West, with lineups changing based on location.

‍The 96th Annual Macy’s Thanksgiving Day Parade (November 24, NYC)
‍There’s nothing quite like a chilly morning with Broadway stars, marching bands, performance groups, and balloons. Kick off the holiday with one of NYC’s greatest traditions. The best spots to view are on Central Park West and Sixth Avenue. Check out the full route here.

‍The Jinkx and DeLa Holiday Show (December 2-3, Town Hall)
‍If you’ve seen their Hulu special, you know that Jinkx Monsoon and BenDeLaCreme are two queens who know exactly how to put on a show. The pair have been hard at work on new material for the tour (Ed. note: so much holiday drag on tour, I love it!), but here’s hoping they keep hits like “The Nativity Twist” and “Everyone Is Traumatized by Christmas.”

‍Kiki & Herb: Do You Hear What We Hear? (December 3, Beacon Theatre)
‍Fresh off their sold-out run at BAM last year, the Tony-nominated boozy duo (portrayed by Justin Vivian Bond and Kenny Mellman) are back at it again to bring Christmas cheer in their very unique and twisted way. You’d never think that Radiohead’s “Creep” would work in a Christmas medley, but you’d be wrong! It’s an evening you’ll never forget (although Kiki definitely will).
P.S. Bond will play a short residency at Joe’s Pub later in the month titled Oh Mary, It’s Christmas! from December 16-23.

‍Broadway Sings Mariah Carey: A Holiday Spectacular (December 5, Sony Hall)
‍A slew of Broadway favorites, including Jeanette Bayardelle, Amber Ardolino, Tamika Lawrence, and Samantha Pauly, take the stage to sing from Mimi’s two beloved holiday albums. My only Christmas wish this year is a massive 12-women ensemble take on “All I Want for Christmas Is You.” A live stream will also be available.

‍Advent Carolndar Live! (December 12, Chelsea Music Hall)
‍After three seasons of hilarious ditties on social media, Julia Mattison and Joel Waggoner flee their tinseled living room set for an in-person performance. The duo have promised audiences can sing along to hits like “Tiny Little Christmas House,” “Stable Girl,” and more, along with plenty of opportunities for new songs on the spot.

‍Get Happy: A Judy Garland Centennial (December 12, Carnegie Hall)
‍Broadway star Jessica Vosk returns to the famed NYC concert venue with special guest Andy Karl for a celebration of the legend that is Judy Garland. While not technically a holiday concert, we’re including since it’s the middle of December and there’s no way Vosk skips Garland’s arrangement of “Have Yourself a Merry Little Christmas,” right?!

‍SCUNGE! In the Theater (December 16-18, Birdland)
‍Imagine A Christmas Carol but with mobsters and that’s pretty close to what this adult comedy will feel like. Written by and starring Dominic Scaglione, Jr., Andy Karl, Dominic Nolfi, and Matt Bogart, this will be a night audiences can’t refuse.

The Skivvies: Sleigh My Name (December 17-18, Chelsea Table + Stage)
Celebrating their new album of the same name,  the scantily clad performers (led by Lauren Molina and Nick Cearly) will strip down some of the best carols for a sexy night of holiday fun! A live stream option will be available for those who want to enjoy from home.

A Hanukkah Carol, or GELT TRIP! The Musicale (December 18, Green Room 42)
This new musical follows a unique type of Scrooge: a narcissistic millennial influencer. Obsessed with her social media empire, Chava has no time or energy for the real world, for actual friendships, or—least of all—for Hanukkah with her family. This “kosher” spin on the Dickensian tale will receive an industry reading prior to the concert, which features Ephie Aardema, Gilbert L. Bailey II, and Joy Hermalyn.

Eleri Ward: Keep a Tender Distance (December 19, Sony Hall)
Another non-holiday concert deserving of attention is this tribute to Stephen Sondheim, who passed away last year. Ward, currently in Only Gold, will sing tunes from her latest album with a number of Broadway lumineries joining in. The guest list includes Laura Benanti, Bobby Conte, Julia Murney, and Samantha Pauly.

Matt Doyle and the Whiskey 5 (December 19, Chelsea Table + Stage)
Pour a couple belts of bourbon and get ready for an evening with this Company Tony winner and his band. Performing songs from their 2014 album Make The Season Bright, the group will sing a wide range of holiday favorites.

Karen Mason Christmas (December 19, Birdland)
‍As the original Tanya in Broadway’s Mamma Mia, this star knows how to put on a party. Sassy, brassy, and tinged with confessional monologues, Mason’s show includes a slinky arrangement of “Santa Claus Is Coming To Town,” a heartfelt “I’ll Be Home For Christmas,” and more.‍

A Holiday Evening with Samantha Pauly (December 20, Chelsea Table + Stage)
The Six on Broadway star and Evita Olivier nominee returns to the Midtown venue for a Christmas-ified version of her concert show.

‍Kwanzaa: A Regeneration Celebration (December 30, Apollo Theatre)
‍Following a two-year absence, this annual celebration returns for an evening of celebration and reflection through dance, music, and spoken word. Honoring the principles of Kwanzaa—family, community, and culture—will be Forces of Nature Dance Theater and actress Stephanie Berry.

‍New Year’s Eve with Jenn Colella (December 31, 54 Below)
‍Ring in 2023 with this beloved Broadway star. The Come From Away Tony nominee will take the stage at 11 PM and perform until it’s time for a countdown, then start back up again after champagne has been toasted and kisses have been smooched.